Newlywed Micah Thor, also known as VP of Operations at Tech Guru, traveled to Brazil for a honeymoon with his wife Cara-Lin.  The couple covered several hot spots and a location or two you can barely spot on a map.

Micah and Cara-Lin started in Copacabana Beach in Southern Rio for New Year’s Eve festivities.  To spend the holiday there is not for the faint of heart: two million people blanket the beach wearing all white (for luck!) to watch a spectacular fireworks display at midnight.

Next, the pair spent three days in Rio and among other things, visited Corcovado, known as the 8th Wonder of the World.  Corcovado, meaning “hunchback” in Portuguese, is a mountain in the national park of Tijuca Forest.  The hill is just west of the city center and famous worldwide for the 125-ft statue of Jesus atop its peak. 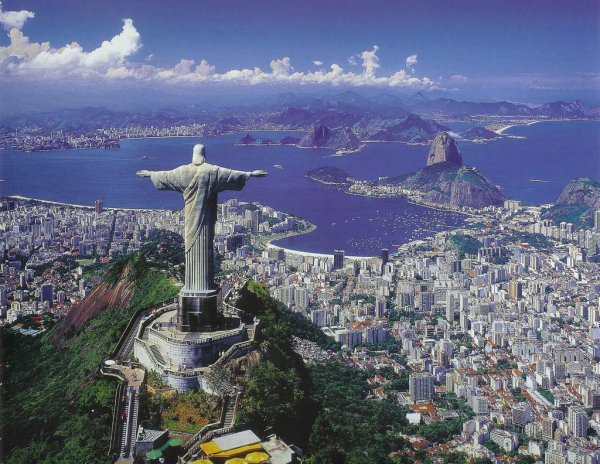 The couple then spent a few days in Ilha Grande. First, they visited the colonial town of Paratay.  Micah and Cara-Lin also spent a few days tucked away in the Ilha Grande rainforest.  They would get to town by hiking 30 minutes from their house through the jungle “straight up both ways.”

After their respite in Ilha Grande, the pair traveled to Salvador, the largest city on the Northeast coast and a more African-influenced area of Brazil, staying in Praca da Se.  Micah and Cara-Lin then relaxed for a quick day and night in Morro De Sao Paulo, a carless village on the island of Tinhare, enjoying a more traditional resort destination.

While on the island, they took a 2-hour hike to a secluded beach, Lopes Mendes Beach – quite simply, “The most amazing beach I’d ever been to,” says Micah.  They spent the day there after a four-hour round-trip hike.  The “must-visit” beach is practically deserted and boasts two miles of sand between the rainforest and the water.

Also notable about Micah and Cara-Lin’s experience was that they used almost every available mode of transportation, with the exception of a train, on their honeymoon.  Micah and Cara-Lin travelled on buses, vans, taxis, boats, ferries, private cars, fishing boats, and of course, airplanes.

When they first arrived, Micah got a SIM card for his smartphone that provided internet access.  They used this helpful & intuitive technology throughout the trip help make travel easier and more memorable.  He took photos of signs and menus with Google Translate which translated the Portugese into english.  Google Camera helped make memories like never before with 360 degree panoramic photograps.  Google Maps provided transit times and routes. Finally, Instagram made it easy and fun to share photos with friends and family back home.

Now back on U.S. soil, the couple has returned to their routine, which includes cycling for Micah and running for Cara-Lin.  Presumably, these two are preparing for their next remote-rainforest hike in an exotic destination.